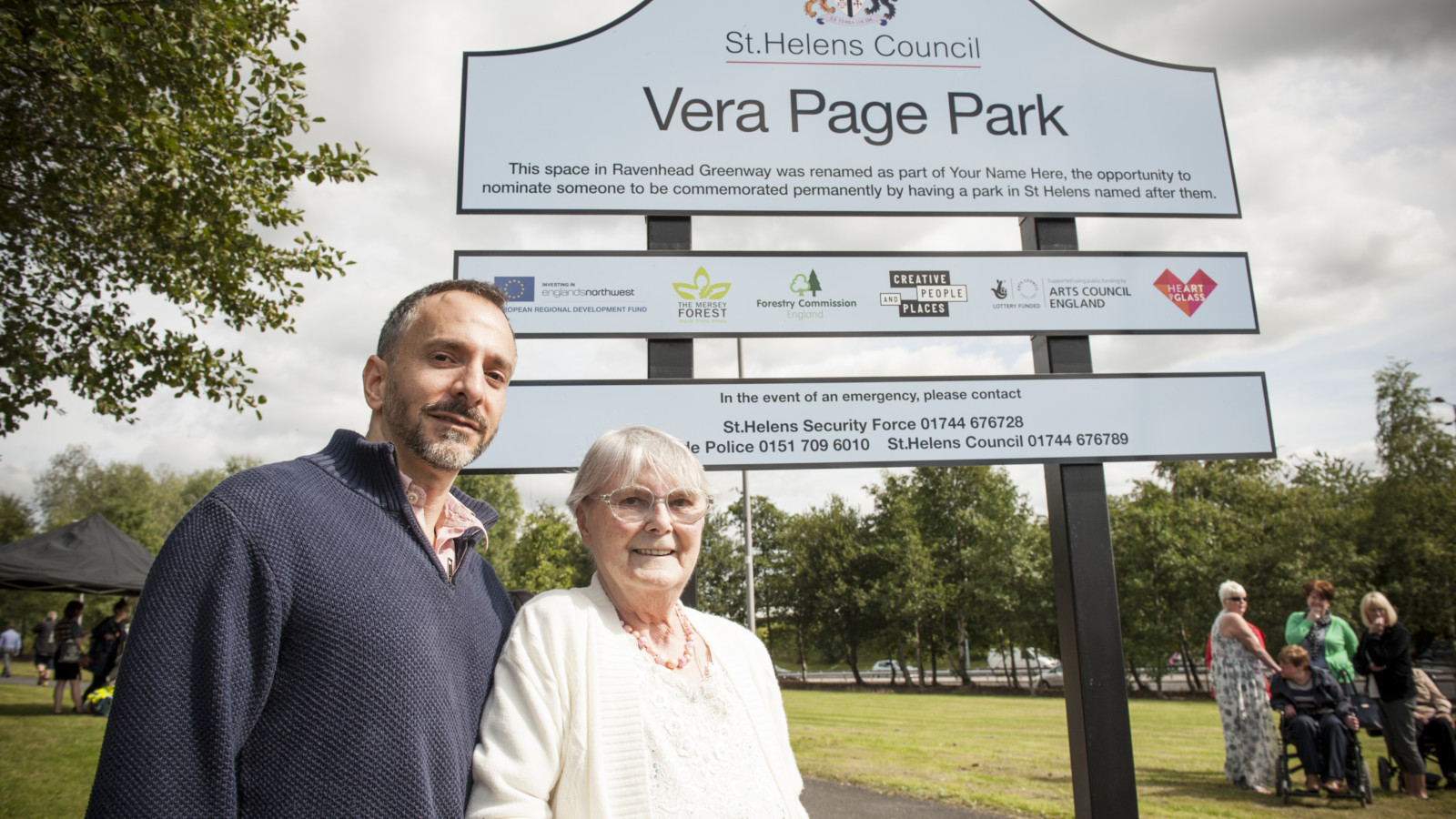 I am nominating myself as a child.

Your Name Here was the opportunity to nominate someone to become the name of a park in St Helens. We received hundreds of qualifying nominations, an amazing response which draws a portrait of the town.

There were a number of themes that emerged: stories of forgotten figures from St Helens; people who have given to their community; nominations for loved family members and tributes to friends; memorials for those who have passed; and people who nominated themselves with very different reasons. Nominations were sometimes funny, often deeply moving, and always sincere.

In towns and cities across the country, streets, parks and buildings are named after people. Those selected are normally kings or queens, ministers of government, or those who have contributed something of great cultural significance to society. Most of them have long since passed from this world. Rarely is there a chance to name a place after the ordinary people who live there. Your Name Here was such an opportunity.

The justification for naming a place after a person is generally that they are already celebrated. Their name is well known because of their status or what they have done. When naming a park after another kind of person, a person who is not known beyond their immediate social circle and who has led a quiet life, what kinds of criteria can you use to judge? What makes one person worthy of having a park named after them more than another?

It is an extremely difficult task. People will hold a range of opinions and yet more important than any one individual being singled out is the idea that we, as citizens, have the power to take control over our environment and leave our mark on it.

During the call for nominations a giant neon sign reading Your Name Here was installed on St Helens Town Hall and 100,000 fliers were distributed across the borough. Over 500 people took part in workshops in schools, libraries, community centres, clubs and societies. Your Name Here unearthed all kinds of interesting accounts about residents of the town. The judging panel were delighted and impressed by the wealth of engaging people and inspirational stories. As one member put it, “We need more parks to name!”

Vera Bowes happened to attend an oral history reminiscence workshop in the communal lounge of her sheltered housing. It was at this meeting that she shared her story.

‘We were greatly touched by Vera Bowes’ nomination of herself as a child, under her birth name Vera Page. For a project with the title, Your Name Here, it is wonderful to see someone who has tried to imagine what it would mean for them personally to have a park named after them, and to think of the opportunity as a way of confronting demons of the past. Vera’s story of abandonment, despair and hardship may resonate with many of us; it is also uniquely her own. We want the naming of Vera Page Park to stand as a symbol for all of us who need to acknowledge the hurt of the past in order to heal.’

Vera’s story is a reminder to recognise all neglected children. It is a tribute to both the young and the old, and the struggles many of us go through in life as we try to make peace with our past.

I am nominating myself as a child.

I can’t forget the little girl who thought she wasn’t wanted and how it affected my life.

My real Mum died when I was a baby. My Dad didn’t want me after he re-married. So my Grandma brought me up with the others, but she died when I was four. After that my Aunt Rose looked after me. I called her Mam, thinking she was my mother. But at 15, she had to tell me the truth, because her husband didn’t want to keep me.

I married and had five of my own children, but lost two of them. My husband knocked me about and I suffered a nervous breakdown. The nurses had to teach me to walk and talk again – I’d gone completely.

People tell me to forget the past, but they don’t know what those years did to me.

Vera Page Park was launched on Saturday 5th September 2015 and it will remain in place for people to enjoy in perpetuity. It will become part of the fabric of the town, and all the maps will have to change.

A selection of the many hundreds of nominations were published in the town newspaper, the St Helens Star. 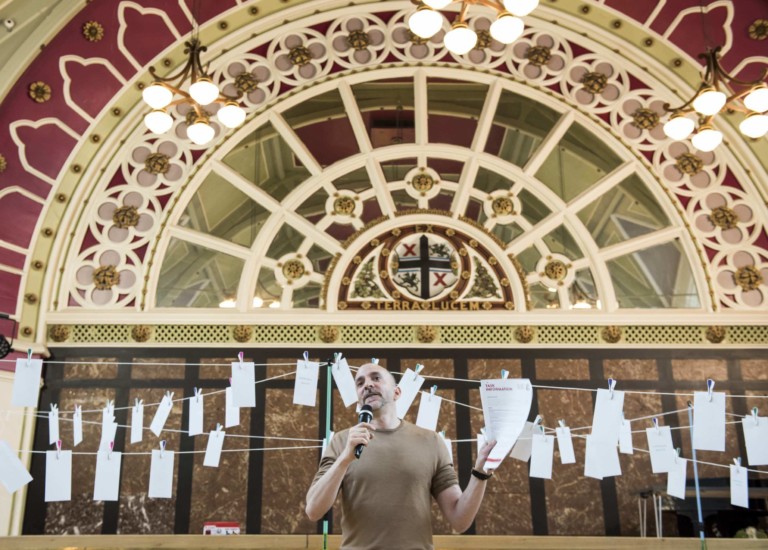 Joshua Sofaer is an artist who is centrally concerned with ﻿modes of collaboration and participation, which he explores through social sculpture, ﻿performance, installation, exhibition and publication.
Read More

Categories
Your Name Here was a six month project inviting people to nominate a person with a strong link to St Helens who's name should be used to rename Lyons Yard, Ravenhead Greenway Park.
Read More

Categories
On July 31st and August 1st and 2nd 2015, St Helen’s Town Centre was brought to life with street performance, circus and contemporary dance.
Read More
Back to top