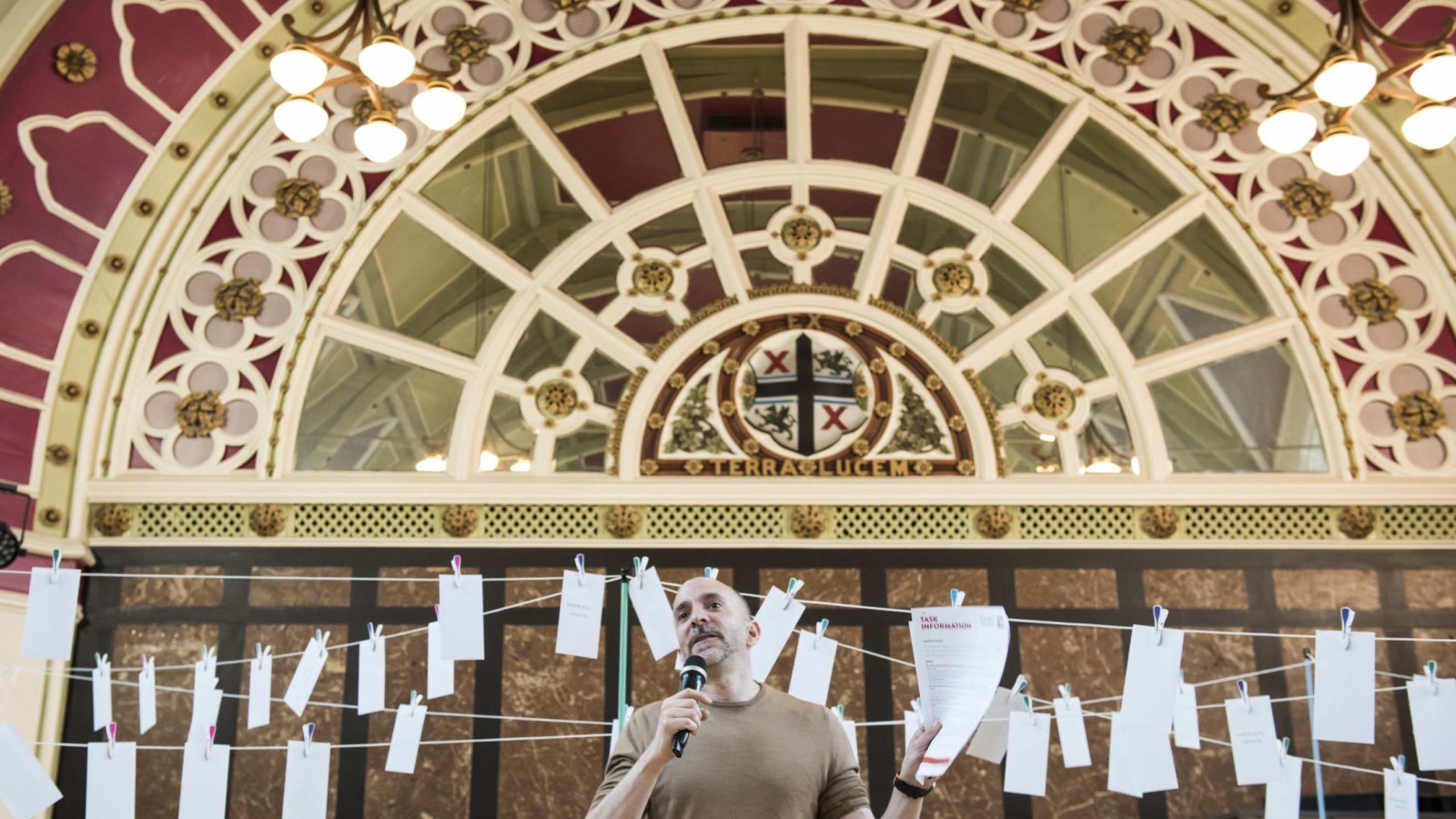 Joshua Sofaer (b. 1972 Cambridge, England) is an artist who is centrally concerned with modes of collaboration and participation, which he explores through social sculpture, performance, installation, exhibition and publication.

Equally as comfortable in the clean white gallery, the dramatic curtained stage of the opera house, the carefully positioned vitrine of the museum, the shared areas of public space, and the domestic personalised rooms of private homes, what draws Sofaer's diverse practices together is a concern with how audiences engage with the world as a place of potentiality. People’s experience is key, as are the material cultures they choose to surround themselves with.

For Scavengers (Tate Modern, London; SFMOMA, San Francisco; Edinburgh Festival) members of the public raced around the city answering clues and forming a new gallery exhibition. Name in Lights was a national competition and installation in the City of Birmingham that culminated in a giant illuminated name in Centenary Square. Object Retrieval (a Wellcome project for UCL) was nominated for a Museum & Heritage Award for Excellence. Viver a Rua was the opportunity for citizens of Porto in Portugal to nominate someone to become the permanent name of a street in the city; all the maps have had to change. Sofaer directed a new staged version of Bach’s St Matthew Passion for Folkoperan in Stockholm. The Rubbish Collection at Science Museum London saw every single thing thrown out by staff, contractors and 281,647 visitors documented for 30 days before becoming an exhibition. He conceived and directed Border Force an immersive nightclub, for Duckie and created Your Name Here for Heart of Glass, which took over the town of St Helens. Sofaer’s interest in ‘the nose’ has led to a recent body of work that plays with absurdity and disguise for The Horniman Museum, Wellcome Collection, and Hull 2017 City of Culture.

From 2019-2021 he created River Crossing for the cities of Sacramento and West Sacramento in California, which culminated in two large-scale public artworks that signal to each other across the Sacramento River.

Sofaer was a winner of the first Bank of America CREATE Art Award and was the first Artist Fellow on the 2010/11 Clore Leadership Programme.

After a BA in Drama & English at Bristol University, Joshua went on to complete an MA in Fine Art at Central Saint Martins College of Art & Design and was subsequently awarded a PhD from Dartington College of Arts.

He is currently Visiting Specialist in the department of Chinese Literature at National Cheng Kong University, Tainan, Taiwan.

Categories
Your Name Here was a six month project inviting people to nominate a person with a strong link to St Helens who's name should be used to rename Lyons Yard, Ravenhead Greenway Park.
Read More

Categories
A different kind of conference. Each year we invite colleagues and comrades from the UK and beyond to the town of St Helens to discuss, the role of art in the modern world.
Read More
Back to top