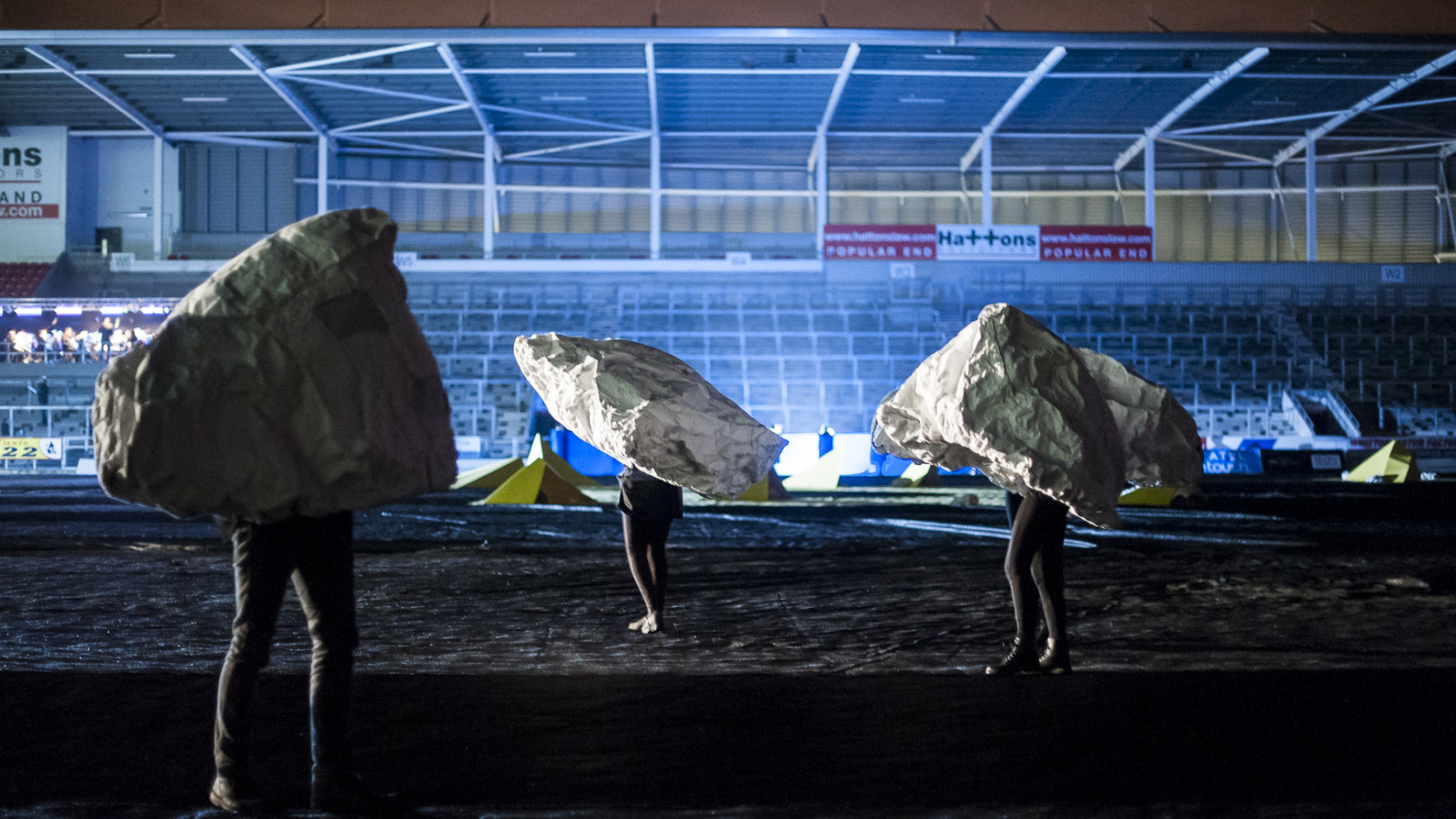 Silent Night/ 'And, on that note'

The works in ‘And, on that note’ represented individual and collective endurance – the patterns within the moments of exertion where action, feeling and meaning become one.

Langtree Park, home of the St.Helens R.F.C. hosted an evening of musical reflection and visual art in an event linked to the anniversary of the World War 1 Christmas Truce of 1914 titled Silent Night / ‘And, on that note’. Produced by Heart of Glass in collaboration with Saints Community Development Foundation and St.Helens Music Service, the evening was symbolic of our desire to create unique arts experiences by fusing disciplines and initiating collaborations; making bold new work.

The much written about ‘truce’, a series of widespread, unofficial ceasefires, took place along the Western Front throughout the weeks before Christmas 1914. This act of collective solidarity against a backdrop of conflict and tragedy inspired a special evening of events when for one evening we brought together school, church and community choirs from across the borough, forming a mass choir of some 500+ local singers to perform a specially selected series of hymns and Christmas classics backed by a local brass band.

Artist Rhona Byrne created a visual intervention for the evening combining the choral voices with sculpture, performance, and audience participation. Her work, ‘And, on that note’ considered moments of transition, states of uncertainty, in between private thought and public behaviour. Locally based artists, volunteers and students from St. Helens College and Carmel College collaborated with Rhona in the making of the event.

A Moving threshold, a fabric sculpture for which performers provided a flexible frame, greeted the audience as they entered the Arena. The choir reformed as an Emotional Choir with a series of experimental choral interludes exploring laughter and obsession. A carpeted Landmass sat still in the darkness of the arena’s pitch until it rumbled and fell apart. A mass of Moving Sculptures of boulders and black clouds negotiated the terrain.

The works in ‘And, on that note’ represented individual and collective endurance – the patterns within the moments of exertion where action, feeling and meaning become one. Each element considered the ‘self’ during moments of human interaction and gathering, reflecting on the desires and tensions between isolation, connection and unity that this presents.

And, On That Note

Categories
'And, on that Note' is a visual art commission which combined choral voices with sculpture, performance and audience participation.
Read More

Invaders of the Lost Park, an animation by St Helens community groups and Twin Vision

On 8th December 2018, as part of the We Are Still Here: St Helens 150 Finale there was a very special premiere in St Helens Town Hall.
Categories
Place
Read More

We Are Still Here

Categories
As part of a co-production programme, Mckeown led a number of workshops over 2018 in the lead up to the mass outdoor video projection.
Read More
Back to top