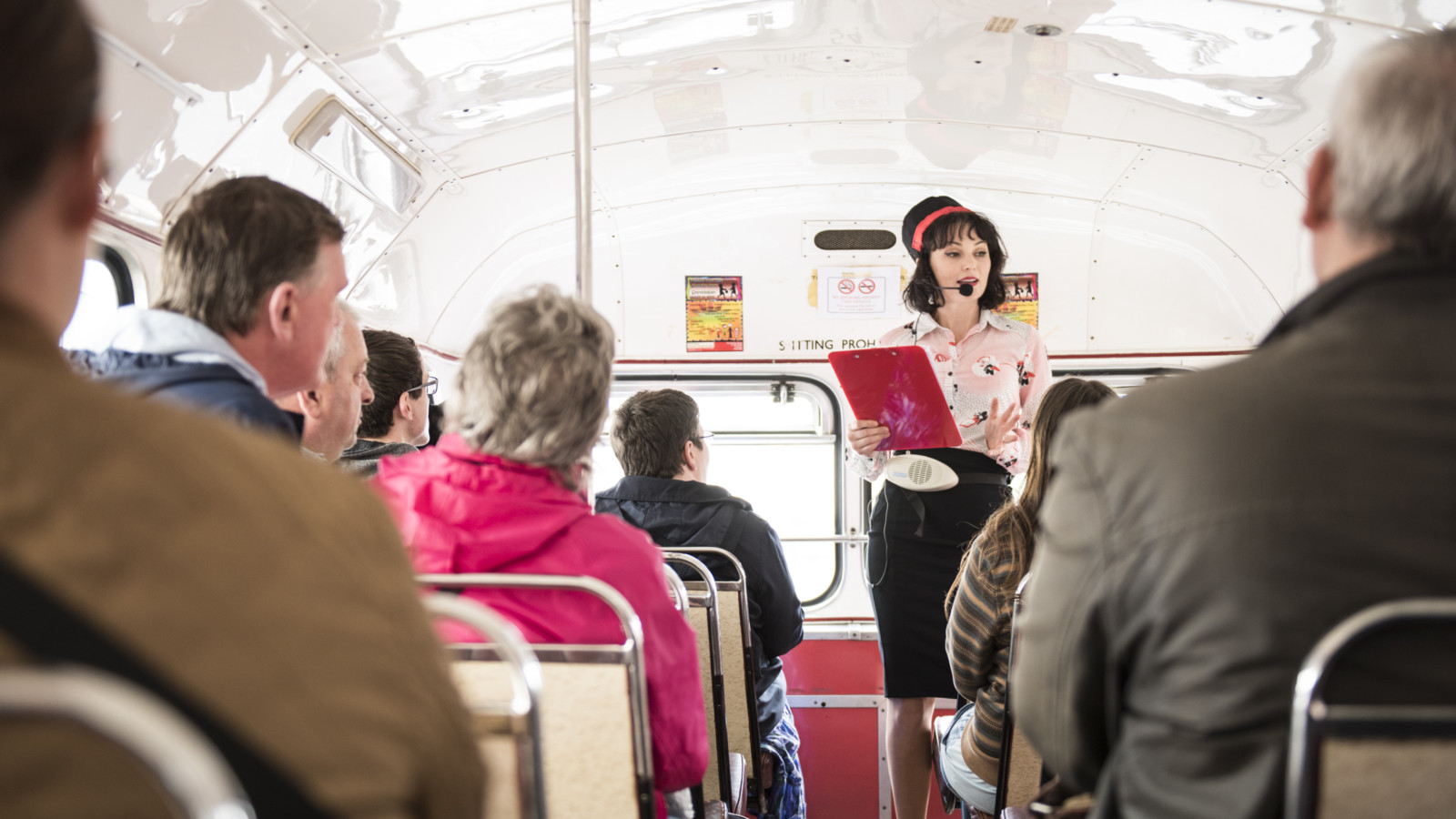 "It seemed like a celebration of not so much the town but the people in it, a sort of portrait of St. Helens"

There was standing room only as a 1960’s St. Helens bus returned to the streets as part of a Heart of Glass artist commission. Artist Lowri Evans took on the role of conductor / tour guide for two sold out explorations of St Helens with stops at Windleshaw Chantry, Lowe House and Victoria Park bandstand.

The project, a Heart of Glass commission, was developed and led by a newly formed Community Commissioning panel – a group of individuals from across St.Helens who have been working with Heart of Glass over the past couple of months to initiate new projects.

The group commissioned Lowri to develop the project that saw an ex St Helens corporation bus return to the streets of the borough. In the development of the project Lowri met and recorded stories and anecdotes from around the town. These personal and historical facts were retold to passengers as an ‘alternative tour’ as they visited local landmarks throughout the town on the vintage bus.

A recording of voices and music collected during Lowri’s walks during 7th – 12th September will also be pressed into a limited edition vinyl as a legacy and record of the project and its participants.

The project was bought together by Heart of Glass with the support of Northwest Museum of Road Transport at the Old Bus Depot on Hall Street, St Helens.

Lowri, said: “It was like a real coach trip, with lots of camaraderie. There was laughter and tears and cheers aboard the bus. I found out lots of stories tied to places as the bus looped around St. Helens – the stolen records that turned up in the junk shop, which baker really does the best pies in town, the crowd-funding adopt a bell scheme in the 1920s at Lowe House.”

“We beeped and waved at passengers’ relatives who we passed on the route who came out to see the bus. It seemed like a celebration of not so much the town but the people in it, a sort of portrait of St. Helens made from chance encounters, the kindness of strangers and fragments of memory. But instead of it being a nostalgic trip, it felt like it was about now, and I was surprised by how much there is to look forward to, it was a confirmation of the life and lives, after industry.”

Lowri Evans is an artist based in Manchester, UK and São Paulo, Brazil. She makes intimate art projects in unusual places with complete strangers. Art is her way of saying ‘sometimes I feel like this, do you?’
Read More

A Proper St Helens Knees Up

Categories
2018 has been such an incredible year for St Helens!  There’s been lots to celebrate! Our Royal Wrap Party, hosted by Eggs Collective, will bring this year to a close.
Read More
Back to top