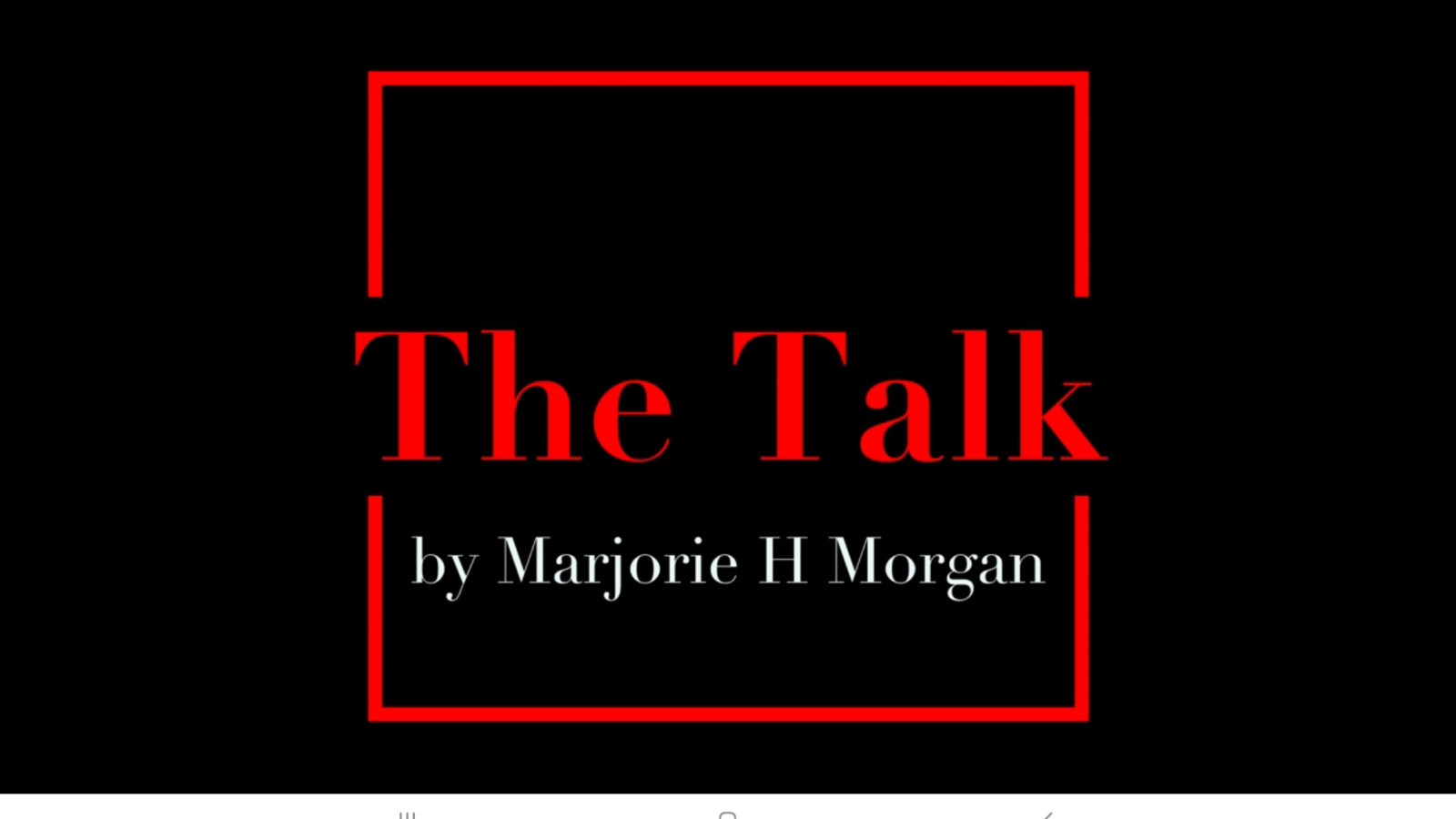 Introducing The Talk, a new commission by Marjorie H Morgan

'The Talk' by Marjorie H Morgan is a short 'public service announcement' style film giving a brief insight into the personal impact of racism in the lives of Black young men in the UK.

'The Talk', and associated resources are intended to stimulate discussion, education and conversation into the reality of some aspects of life lived while Black in the UK, in the hope that barriers will be removed and equality and equity of opportunity and access will increase.

On the 28th January 2020 we held a conversation between Marjorie H Morgan and Professors Patricia Daley and Geoff Palmer as they expand and explore the themes of The Talk. You can access the full recording of the event here.

"When, in late 2020, I received this commission from Heart of Glass, I was delighted because as an artist who has now been shielding for almost a year, work has been hard to come by; inspiration has been squashed by world events, the desire to create has been side-lined by the desire to survive the viruses that have been sweeping the globe.

The past year has been a time like no other in living memory. Everybody is tired. Tired of the pandemic, tired of lockdowns, tired of news punctuated by deaths.

The global population has been forced to watch as the world as it was known at the start of 2019 slowly started to shut down before that year even closed.
For a long while, 2020 was looked forward to by many as a time for a renewal, a year of clarity and vision: nobody really expected the reality that would flash across our screens, timelines, and hearts as death and grief became the most prominent talking points of the year.

Covid-19 has been, and still is, at time of writing (January 2021) a brutal and unwelcome house-guest. While locked down the world turned inwards to look outwards at the systems of inequality that were exacerbated by the indiscriminate hand of the pandemic virus.

The long-term viruses of discrimination of planned poverty, structural work and educational discrimination, and institutional racism all came to a boiling point with the public murder of George Floyd in Minneapolis on 25 May 2020. The world reacted.

In the middle of the first lockdown of 2020, many white people woke up to the virus of racism: they saw, - many for the first time - blatant inequality in the way justice was dispensed based on skin colour. Many Black people slumped their shoulders and felt the repeated grief and trauma of seeing another ‘person who fit the description’, IC3, ‘suspicious Black man’, ‘code 2’, lose his life at the hand of the people who swear to ‘Serve and Protect’, ‘with fairness, integrity, diligence and impartiality, upholding fundamental human rights and according respect to all people.’

Many white people expressed a desire to be allies, they put up black squares on their social media platforms, around the world they participated with quiet rage as they marched together with their Black neighbours on many socially distanced peaceful protests, they wanted to do better, they ordered books, asked their Black friends to help them understand the problem so they could better help.

That was one of the problems, that they had Black friends and never knew that racism and discrimination was a daily issue for them.

Black people are tired. Tired of witnessing inequality, tired of explaining their reality of everyday discrimination to disbelieving ears, tired of having a target on their back from the day they are born, tired of turning the other cheek, tired of not being permitted to express anger in public without being deemed a threat, tired of the burden of protecting their white friends and associates from the horror of being deemed a racist when they say and do racist things.

Having the time and space to think I decided I wanted to share an integral part of life a Black person in the UK, something that may be largely unknown outside of certain communities, but is nevertheless essential for survival; this is where the idea of 'The Talk' came from.

From an early age, often primary school, Black children across the UK have been receiving a version of 'The Talk’ from their parents since migrants settled in the UK and had families. While still in short trousers Black boys are no longer deemed 'cute children' by society but frequently labelled aggressive, disruptive, sub-normal, troublemakers, problematic, uncommunicative, resistant, and angry men.

'The Talk' is a short PSA-type film that gives a brief insight into the personal impact of racism in the lives of Black young people in the UK.

'The Talk', and associated resources are to stimulate discussion, education and conversation into the reality of some aspects of life lived while Black in the UK, in the hope that equality and equity of opportunity and access will replace the current globally entrenched systems of social discrimination."

This list of resources to watch, read and listen to have been compiled by Marjorie H Morgan to accompany The Talk.

Raising the Bar - Lenny Henry examines the evolving depiction of Afro-Caribbeans on TV from Love Thy Neighbour to Desmond's. From November 2015.

See How Other Countries Are Protesting Police Brutality - CNN episode

Who is Belly Mujinga, the face of BLM protests in UK? - CNN episode

How Racist Are You? - Jane Elliot (Free video via YouTube) | More on the Study

I Am Not Your Negro - James Baldwin (Free with Amazon Prime)

When They See Us - Ava DuVernay (Free with Netflix) + Discussion Guide

Britain Does Owe Reparations - Dr Shashi Tharoor MP "No wonder the sun never set on the British Empire, because even God couldn't trust the English in the dark!" (via YouTube)

Making of Tennis Balls at Rex Rubber - via BFI

An Essential Reading Guide For Fighting Racism - via Buzzfeed

Do the work: an anti-racist reading list - via The Guardian

Natives: Race and Class in the Ruins of Empire - Akala

Deta Hedman: 'I'm not here to please you. I'm here to play a game that I enjoy' - via BBC Sports

The contours of fear: a documentary elegy - Marjorie H Morgan

Racism is still alive and well, 50 years after the UK’s Race Relations Act - via The Guardian

Caribbean nations funding the British war effort - RAF 139 (Jamaica) Squadron so named because of the donations from the island to fund new aircrafts.
https://kenfentonswar.com/139-jamaica-squadron/

"Having lost most of its aircraft in France, the Squadron was in dire need of reequipping and was the subject of a campaign called ‘The Bombers for Britain Fund’. The Squadron name is derived from the resulting fund-raising campaign in the early years of the war led by the Jamaican newspaper, ‘The Gleaner’, with enough donations via the newspaper and Jamaica itself to buy 12 Blenheim’s by 1941."
https://www.independent.co.uk/news/world/europe/images-rescued-dump-reveal-black-british-tommy-somme-1689774.html

Blood Brothers
Talking about identity, Black communities, Black history, Education, Whiteness, School to prison pipeline.
Do Blood Brothers remain linked through all the trials of the British educational system and the structural pillars of society? What happens when history starts repeating itself?
This is the true story of two Blood Brothers from South London.
https://youtu.be/bo2776tKn5Y

Explore more of the projects created through our Home Work commissions series in Chapter Three of our Care Compendium - a document of the many ways in which we are thinking, enacting and valuing care in this moment and beyond.
Categories
Care
Read More

Informed by our learning through this year, we’re supporting seven artists and collectives based in St Helens, Liverpool, Leeds, and London, to develop new work through a series of remote commissions.
Categories
Collectivity
Read More

Not This Future Conversation Series