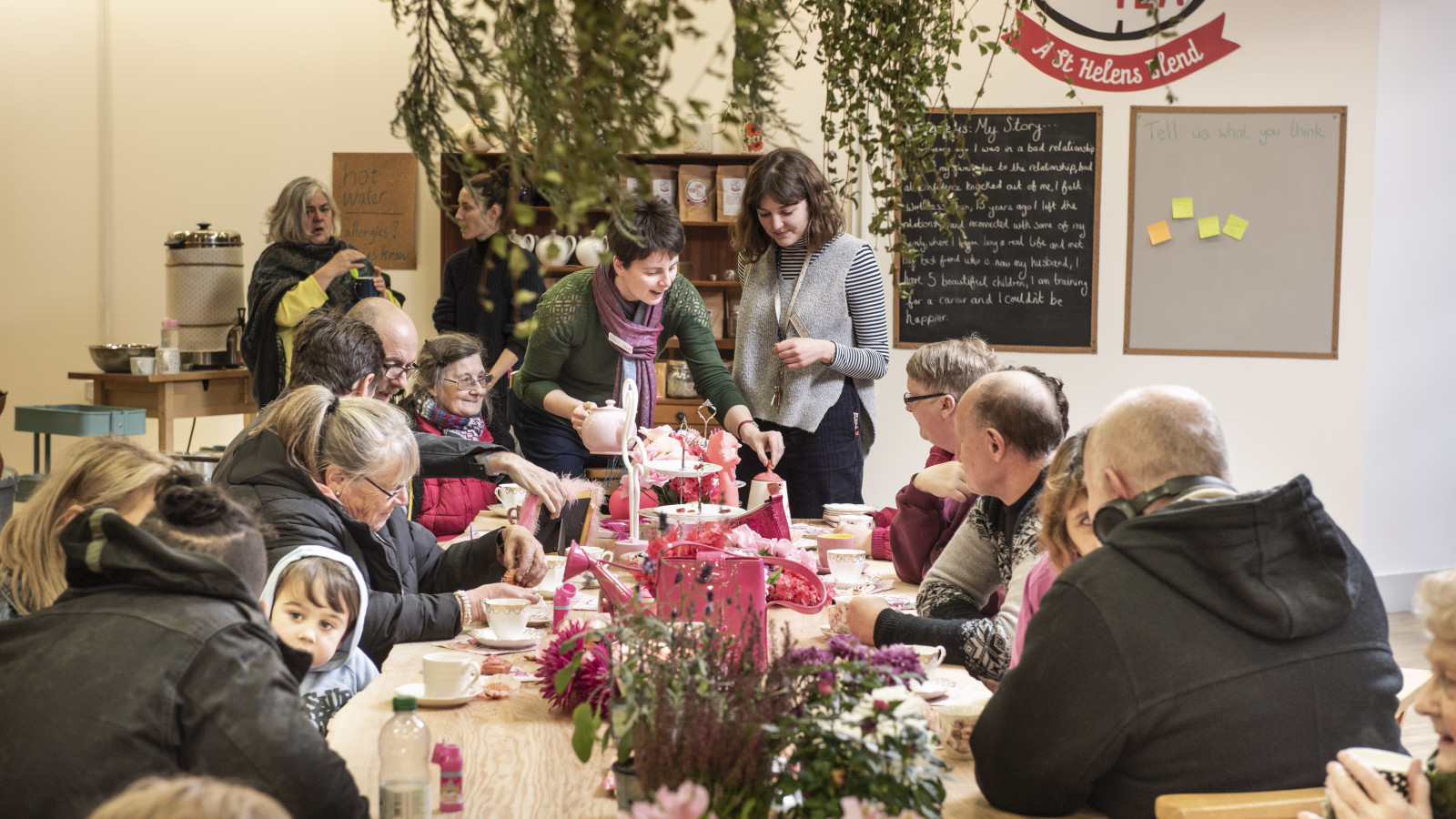 Care as a Radical Act

Chrissie Tiller asks if this could be a new way forward for UK arts?

A few days after the official COVID-19 lockdown began, Heart of Glass invited me to become their temporary writer-in-residence: working together to explore ways to chronicle, and distil the learning, from the strange and disquieting crisis we were entering. Listening that same evening to Canadian writer and activist, Naomi Klein, speaking about the world we might want to emerge from these dark times I was struck by her reference to Milton Friedman’s claim that crises are the only time when ‘real change happens’. Taking up his suggestion that societal change is always determined ‘by whoever is willing to fight harder for the ideas they have lying around’ she goes on to challenge those who would like that world to be a fairer, more just and more caring place one to work together to ensure we are the ones with ideas at the ready.

As I began to speak with the Heart of Glass team about the ideas they were having, alongside the urgent concerns they had for their communities and artists, the disjuncture between the world most of them hoped might emerge from this period and the current reality for many of those they work with was striking.

With many arts organisations ‘rushing to put everything online’ the divide between those with access to what is now a largely digital arts ‘offer’ and those who don’t was felt to be increasingly evident and concerning. As one team member explained, ‘people in our communities are very much in survival mode and this situation is only adding to what many people are already facing’.

Having created an ecology so closely grounded in values of collaboration, community and collective responsibility, questions of how to preserve these ‘spaces of care’, at this time of ‘unprecedented crisis’, when ‘the lines between care and work and home have collapsed’ were at the forefront of all their minds.

‘St Helens can feel like such a vulnerable place… and if it isn’t looked after properly and isn't given the care that is needed...it feels very disappointing.’

At the same time, there was a shared belief that those very communities that we often view as our most vulnerable might also be those with the social capital that would enable us to build this new world. ‘What we're experiencing now in terms of isolation is what a lot of vulnerable, marginalised …people experience daily.’

‘We need to look at the work that’s been done on mutual support by disabled communities in terms of how to create networks of care.’

It was this need to think about how you might somehow ‘replicate that sense of being in the same space with somebody, drinking cups of tea, sharing the 'particles' in the room’ that led to Heart of Glass’s Home Work Open Call.

Reaching out to artists and collaborators who belong to the working class, LGBQT, disabled, refugee communities they make most of their work with, they chose to invite people to wonder ‘what social arts practice might begin to mean in the absence of the social.’ Centred on notions of ‘care’ and questions of how we ‘recognise’ and ‘value’ it, the responses to this call not only highlighted the precariousness and vulnerability of so many artists, in these times as in any time, but also their ability to begin to imagine ‘a world that is otherwise’.

The fifty projects which Heart of Glass were finally able to fund looked at ideas as disparate as challenging perceptions of what care means if you are looking after elderly relatives, wondering what it might look like at a distance, interrogating ideas of self-care, considering the role of ‘gentleness’, questioning what it means in clinical contexts or with groups without a shared language or thinking how one might begin to support people with the grieving for family and friends that will inevitably be part of this crisis.

The planned projects ranged from supporting a terminally ill gardener who continues to try to bring joy to his neighbours in a care unit to providing dance classes for those isolated by language and distance from home.

Another will create a ‘wild’ and environmentally ‘political’ circus show in a small yard, while one project explores fetishising objects, like ‘ironing boards and hoovers,’ that young mothers had identified as the clichés of women’s roles and turning them into strong totemic figures.

They also included gestures as simple as ‘blowing the giant bubbles I’ve learned to make’ over a balcony and capturing and sharing the responses of neighbours in a block of high rise flats and asking for support to justify taking a little time to ‘step out’ from a demanding care role, whether of newly born babies or children with disability, and ‘go out into the garden’ and paint or ‘write for one hour a day.’

In a world where care has become something commoditised, privatised or turned into a profit-making exercise, the framing of the call and these artists’ responses made me think hard about the parallels between the ways we have come to think about care and the way we often think about the arts.

Both often viewed as a one-way contract between provider and recipient whose beneficiaries, or audiences, have been largely characterised as being without agency, without power and without capacity for reciprocity. Those who deliver the work frequently feel equally powerless; unrecognised by a system that has de-valued their skills and neglected to take care of their own well-being and need to flourish. Even notions of ‘self-care’, once proudly owned by Audre Lorde as an ‘act of political warfare,’ have been stripped of their radical roots in both fields and turned into something marketable.

The impact of COVID-19, has, however, as both the Heart of Glass team and their artists noted, given the world the opportunity to turn some of this thinking on its head.

‘It feels as if there's a moment… that’s something around us all taking time for a collective breath, taking a moment to really assess where we're all at and what the right way of moving forward is…for everybody.’

As communities set up their own Mutual Aid groups, work collectively to combat isolation, find ways to address the challenges of their members in terms of disability or mental health issues, recognise carers as essential workers, the paradigms are shifting and ‘the pyramid has been turned upside down’. As one of the Heart of Glass team noted, if governments across the world have suddenly found ways to implement social and economic policies we might once have imagined being seen as too divergent or radical, maybe this is also a time for the arts ‘to be dreaming together’.

Which brought me back to Naomi Klein’s challenge.

Darren Henley has already intimated in his recent blog for Arts Council that we cannot go back to the way things were, especially in terms of how we relate to our communities and our artists. What might happen then if, instead of thinking about re-adjusting our budgets and rewarding those organisations who speak about community engagement we began to take this opportunity to create real systemic change?

What if we began from the principle of putting our communities and our artists first, including funding them in ways that makes inclusion, diversity and cultural democracy real possibilities? What if we began to recognise that large institutions and their buildings are no longer relevant in the same way? What if the devastating impact of COVID-19 on individual artists, alongside the communities they work with, led us to re-build an arts sector that is more collaborative, more transformative and more caring? No longer thinking about our work in terms of audience development but in terms of communal sustenance, embracing concepts of ‘collective care’, linking our values and principles to those of fellow activists, prioritising the commons, taking care of the health of our planet as well as those who live on it, putting ourselves at the centre of the efforts to bring about a different kind of world.

Director of Heart of Glass, Patrick Fox suggests those organisations who have placed communities at the centre of their work, who have been engaged in a more collaborative and social practice, are in a privileged position where this is concerned.

‘In some ways,’ he explains ’we have been running the rehearsal for this kind of thinking …and we know that a sense of collectivism is really possible’. If this practice, he notes ‘is one of the only places where unbound radical thought and moments of utopian possibility can exist…there’s a responsibility to start to be counted and be visible… It's almost as if we need to dial it up right now because the operating system has changed. And actually, it needs to be as loud as we can possibly make it so that this time can’t be unremembered’.

Inspired by the Pirate Care website and its Syllabus of Care as ‘a political notion’, we have named these conversations around the arts and care I have been having with the Heart of Glass team and others beyond as The Shipping Forecast. Like the programme which was first telegraphed to ships out at sea in 1911, we see it as a way of offering connection in dark and disconnected times. As Chris Aldridge, one of the senior announcers, said, speaking about the Shipping Forecast itself, its litany of unknown names, ‘turns our landscape into a slightly ethereal world, inhabited by communities we are connected to but know nothing about. It’s something that binds us together when so much divides us.’ Care can be a radical act. It can challenge the status quo. It can enable us to dare to think collectively about different ways of being together. The arts could decide to tune into the new ways in which people are already connecting, the mutual and collaborative models of caring they are developing and decide this is the moment to reclaim the radical space and create a new blueprint for the society we want to live in.

We might want to start with this thought from a 20th century group of artists and activists, the Black Orchid Collective:

﻿‘Be careful with each other, so we can be dangerous together’

We are committed to operating in solidarity with our community; working towards a just, fair and more caring society for all of us.
Explore Theme

With For About 2020 A slow conference for a fast evolving crisis 20 May to 17 June 2020.
Categories
Collectivity
Read More

In addition to continuing to support the artists, freelancers, and collaborators who we work closely with through our ongoing programme, we also want to support more of you to make work and connect at this time of increased precarity and anxiety.
Categories
Collectivity
Read More

Heart of Glass is a social arts organisation, and collaboration is at the core of what we do. We are made up of a group of individuals and communities who experience the world in many and varied ways.
Categories
Care
Read More
Back to top